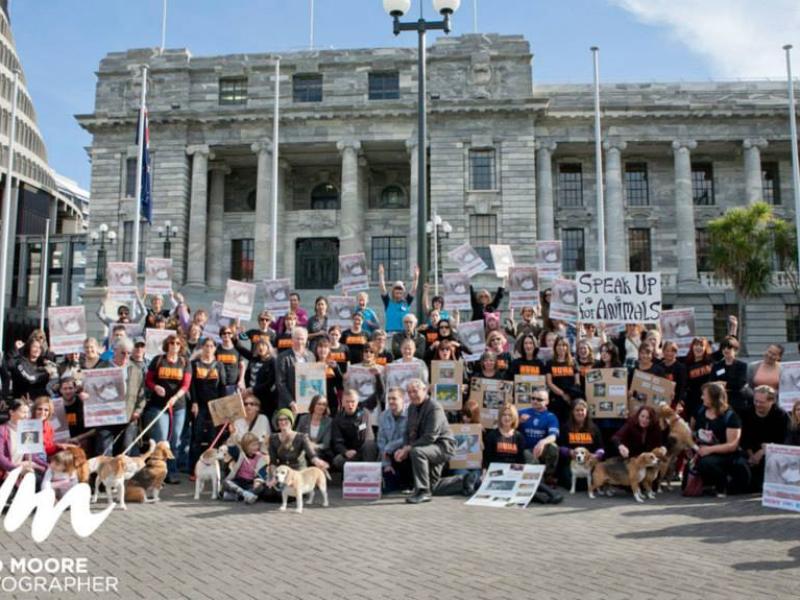 After the considerable public outrage about the proposed animal testing of legal highs, NZAVS met with the RNZSPCA and SAFE to discuss the issue and what could be done about it. This was a significant move as there is some history of differences of opinion between these organisations; it showed though how important they all considered the new testing proposals to be.

Following the meeting, a joint petition to parliament was organised by NZAVS, the RNZSPCA and SAFE. This was the first time the three organisations had never worked in conjunction on a campaign issue in their history and was indicative of the strong opposition to the animal testing of legal highs from all sectors of New Zealand society.

On the 18th of March 2013, the petition was formally launched nationwide. The petition read

"We, the undersigned, respectfully request that the New Zealand Parliament includes a clause specifically prohibiting animal testing in any proposed legislation aimed at the regulation of Psychoactive Substances ("party pills" or "legal highs")."

In the past when such petitions had been organised the collection of signatures was able to be done over many months. It wasn't the case this time though. In order to make the petition have as much impact as possible, it needed to be submitted to parliament before the legislation was passed.

Support for the petition came from a wide variety of large and small groups and businesses as well as individuals that all had the common element of feeling passionately and strongly that the animal testing of legal highs should not be allowed. An incredible amount of work and many volunteer hours from all around the country made the petition a huge success.

In only six weeks an extremely impressive 42,019 written signatures were gathered and a further 25,368 people gave their names in support in the online version of the petition. The petition was handed to Mojo Mathers MP from the Green Party to present to Parliament on the 22nd of May 2012.

The petition was presented so soon after its launch as it needed to be before parliament while the Psychoactive Substances Bill is being considered and voted on. The petition handover day was a successful event attended by a lively group of supporters including many from the HUHA animal sanctuary accompanied by beagles that had been rescued from the VARC research laboratory.

More information on the VARC beagle rescue and the great work the HUHA team does can be found here. This event didn't go unnoticed in the media and by the politicians that would be voting on the legislation.

The health select committee is currently considering the petition, they asked for a submission on it from the petition organiser and this was provided by NZAVS. You can read it in full as a pdf file.

Some of the main points made in the submission are:

-Animal tests are not reliable predictors of drug responses in humans

- There is considerable public opposition to the use of animal tests for recreational drugs, the petition request would address that opposition

The select committee is currently waiting on a response from the Ministry of Health to the submission by NZAVS. Once this has been received by the select committee they will recommend a course of action to be taken by parliament. As soon as we know what the response, if any, is we will let everyone know.