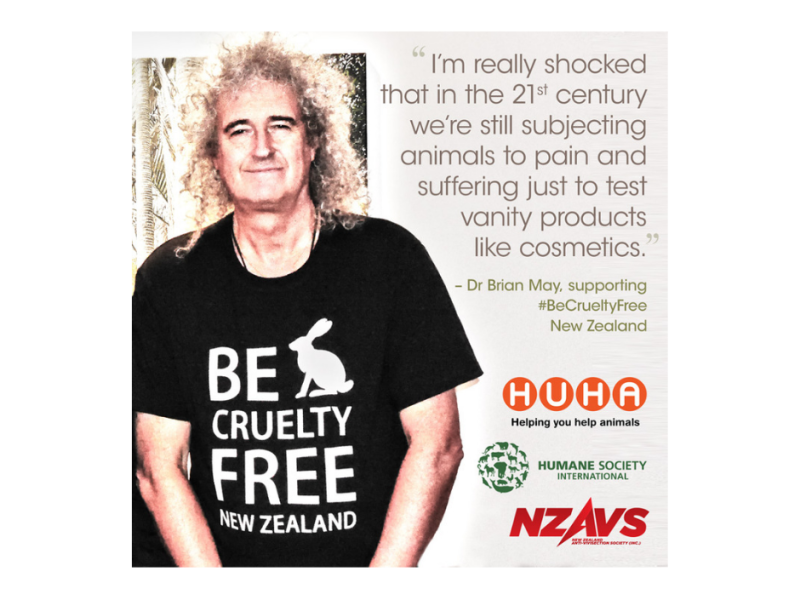 Rock guitar legend and founder of the Save Me Trust, Brian May, took time out from his Queen tour in Auckland, to urge New Zealand to help end the suffering of animals used to test cosmetics such as shampoo and mascara. As he prepared to rock out the Vector Arena, Brian met backstage with 'Be Cruelty Free' New Zealand. The star, who tweeted a photo of himself wearing a 'Be Cruelty Free' t-shirt, said:

"I am really shocked that in the twenty first century we are still subjecting animals to pain and suffering just to test vanity products like cosmetics. Not only does it sadden me as a compassionate human being, but it also stuns me as a scientist that companies, regulators and governments around the world are still relying on these woefully inadequate, out-dated animal tests when we know very well how unreliable they are. New Zealand has a great opportunity to say enough is enough, just like the European Union and India have already done. So I'm urging policy makers in this great country to join me in backing the #BeCrueltyFree campaign, please let's end cosmetics cruelty in New Zealand and the world once and for all."

'Be Cruelty Free' New Zealand is headed by Humane Society International, the New Zealand Anti-Vivisection Society and Helping You Help Animals (HUHA), part of the largest campaign in the world to end cosmetics cruelty.

So far, more than 60,000 people have sent #BeCrueltyFree e-cards to New Zealand's party leaders. Political support for a New Zealand ban has been growing. In March Green MP Mojo Mathers proposed the introduction of a cosmetics animal testing ban as part of amendments to the Animal Welfare Act, and the Labour Party has also pledged a ban should it succeed at the upcoming national election.

'Be Cruelty Free' campaigners are determined to see the issue debated when Parliament reconvenes in November. We are thrilled to have the support of someone like Brian May. Not only is he respected globally for his music, but he is also an immensely important voice within animal protection campaigning and brings real gravitas to our call for New Zealand to end the cruel and unnecessary practice of cosmetics animal testing.

Brian May's Save Me Trust is a non-profit organisation speaking out against the persecution and torture of wildlife for sport. But it's not just foxes and badgers and other wild animals who are at risk. The Trust also periodically expresses support for other initiatives dedicated to ending animal cruelty. Today, Save Me Trust wishes to add its voice to Humane Society International and their campaign to end cosmetics tests on animals in New Zealand.

We urge the New Zealand government to join with the European Union in banning the testing of cosmetics on animals (2009) and the marketing of newly animal-tested cosmetics which came into force in 2013.