Each of the eleven presents represents a type of animal used by the University in 2015, accumulating to a total of over thirteen thousand animals. From mice to reptiles and goats, the University uses over 10 different types of animals for research, testing and teaching every year.

Each present had a gift tag attached to it, which explained how many animals each present represented. There was also an image of the animal used spray painted in red on the side of the gift box (see images below). 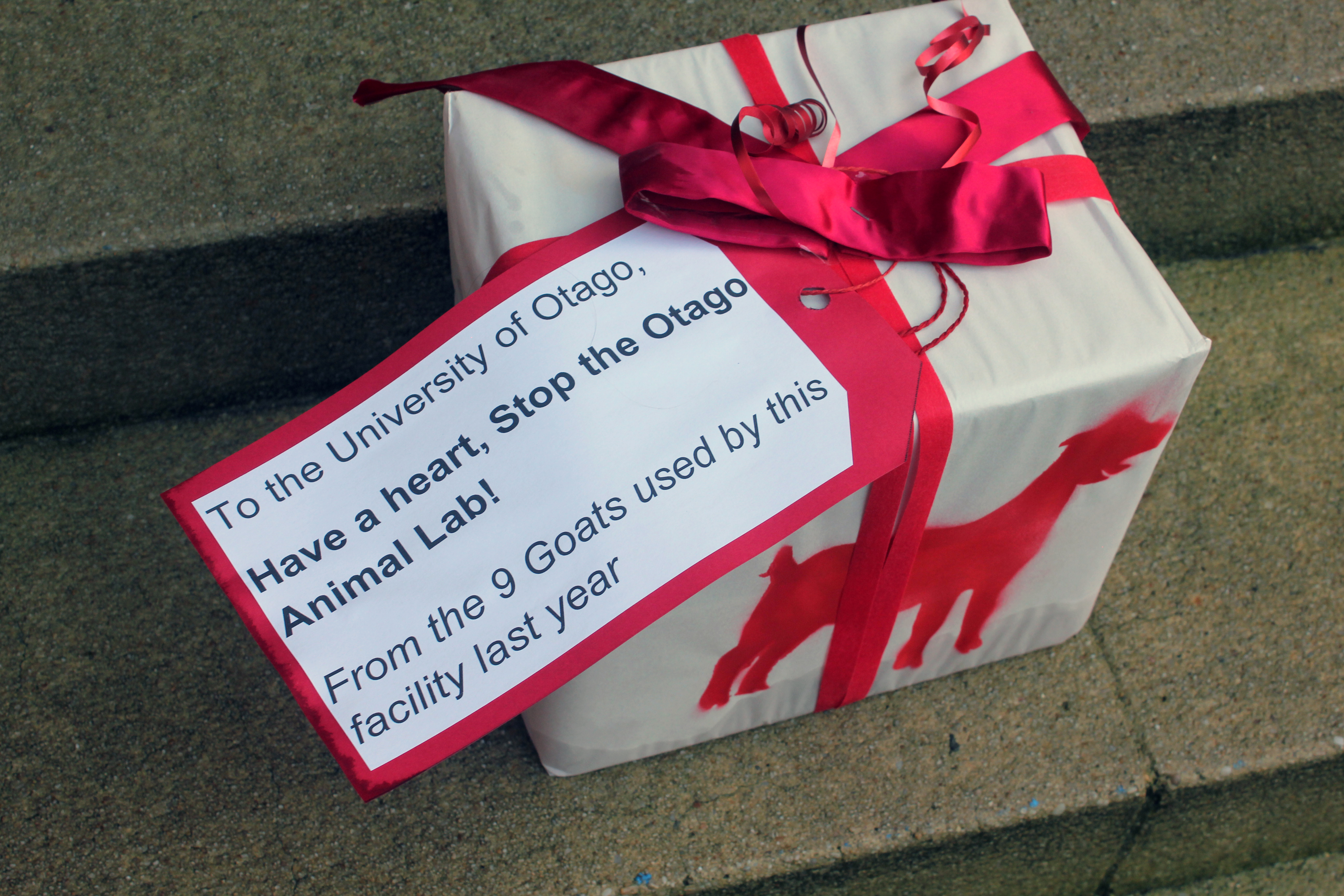 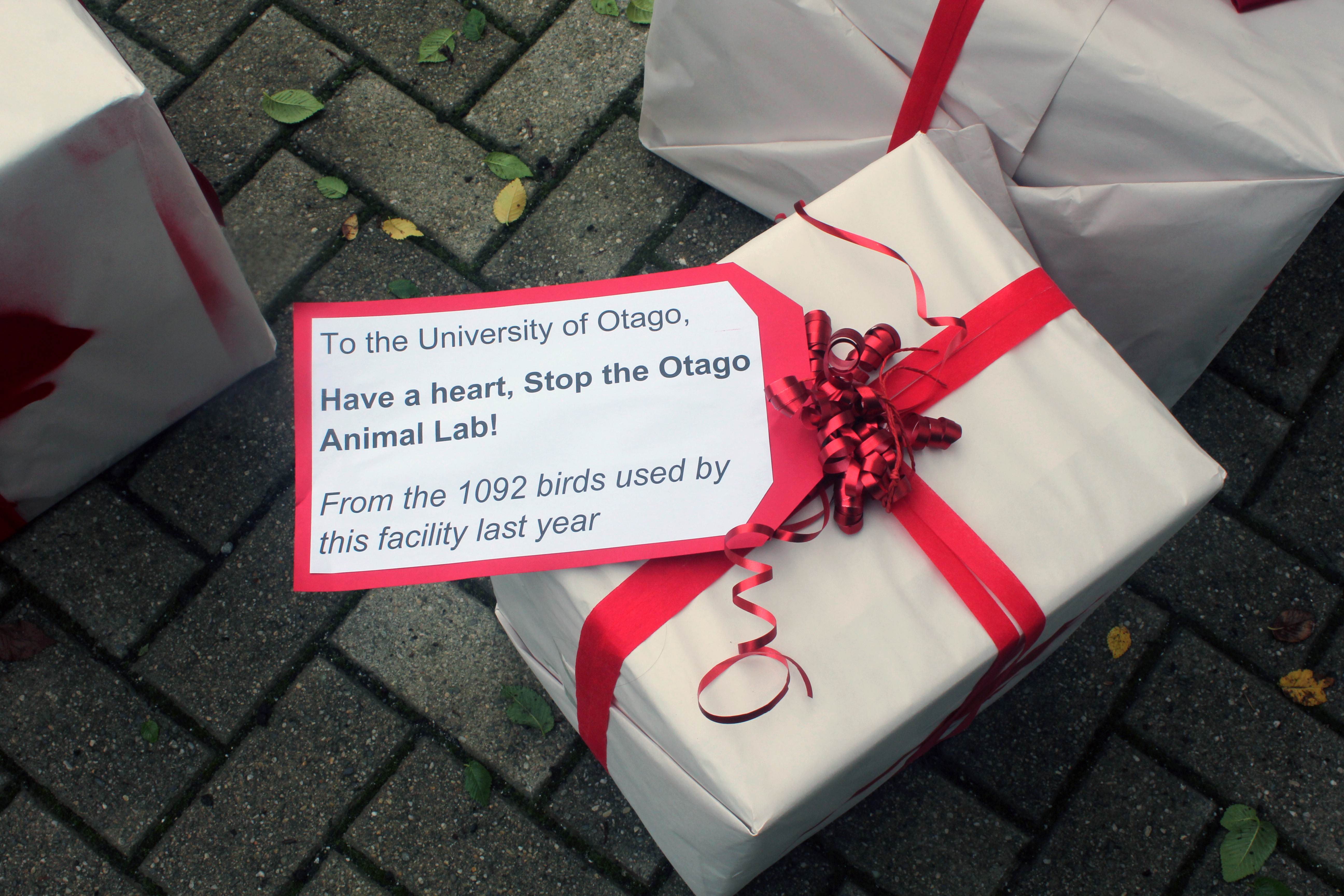 These gifts were used to send a message on behalf of all of the animals who were used by the university last year, and who will be used in the future if the new $50 million animal lab is built: Have a heart Otago, Stop the Otago Animal Lab!

Professor Blaikie and the University have shown they aren't thinking clearly with their heads, so we asked them to think with their hearts, and what better day to do this than on Valentine's Day!

We ask Professor Blaikie and the University of Otago to 'Have a Heart' and discontinue plans for further ineffective animal-based research. If the University wishes to become an innovative institution they will join forward-thinking researchers from around the globe and embrace human-based research in their new facility.

After these gifts weren't collected by Professor Blaikie and we could not get a hold of him to come and collect his gifts, we went and placed them outside the main entrance of the University of Otago Campus early. Shortly after doing so a University representative came and asked us to remove the Valentine“s gift from their private property.

Luckily for us, we have such dedicated volunteers who were willing to sit with the gifts on the public footpath so that members of the general public could come and learn about the Stop the Otago Animal Lab Campaign and take photos with the giant card and presents!

We also want to thank all of our amazing supporters and volunteers for enabling this action. If you want to directly help NZAVS continue to fight against the new $50 million animal lab and against animal testing, then donate now. We need all the help that we can get to abolish vivisection in NZ.

Check out the short clip from the action here. Read more about the Stop the Otago Animal Lab Campaign here and see photos from this action below. 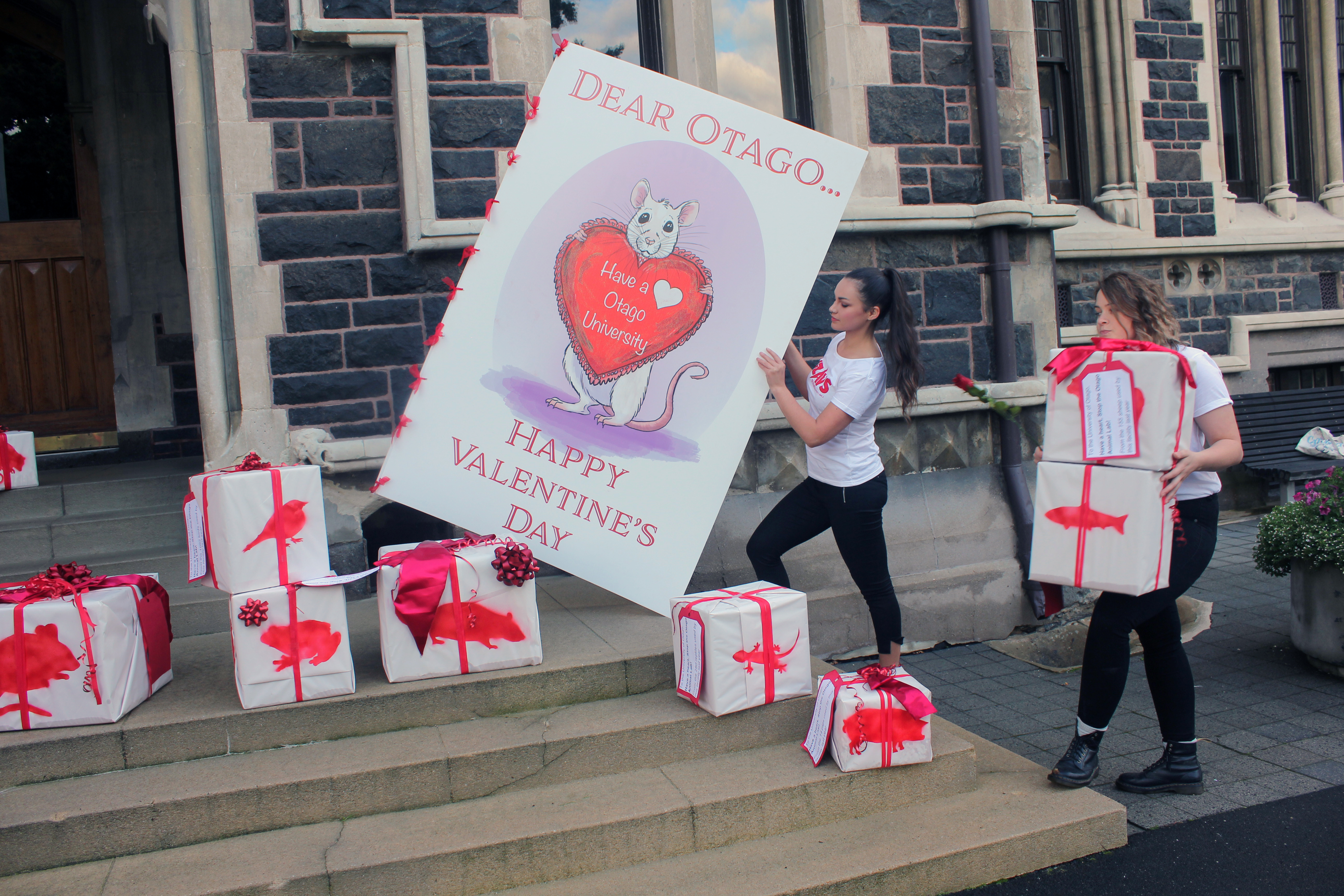 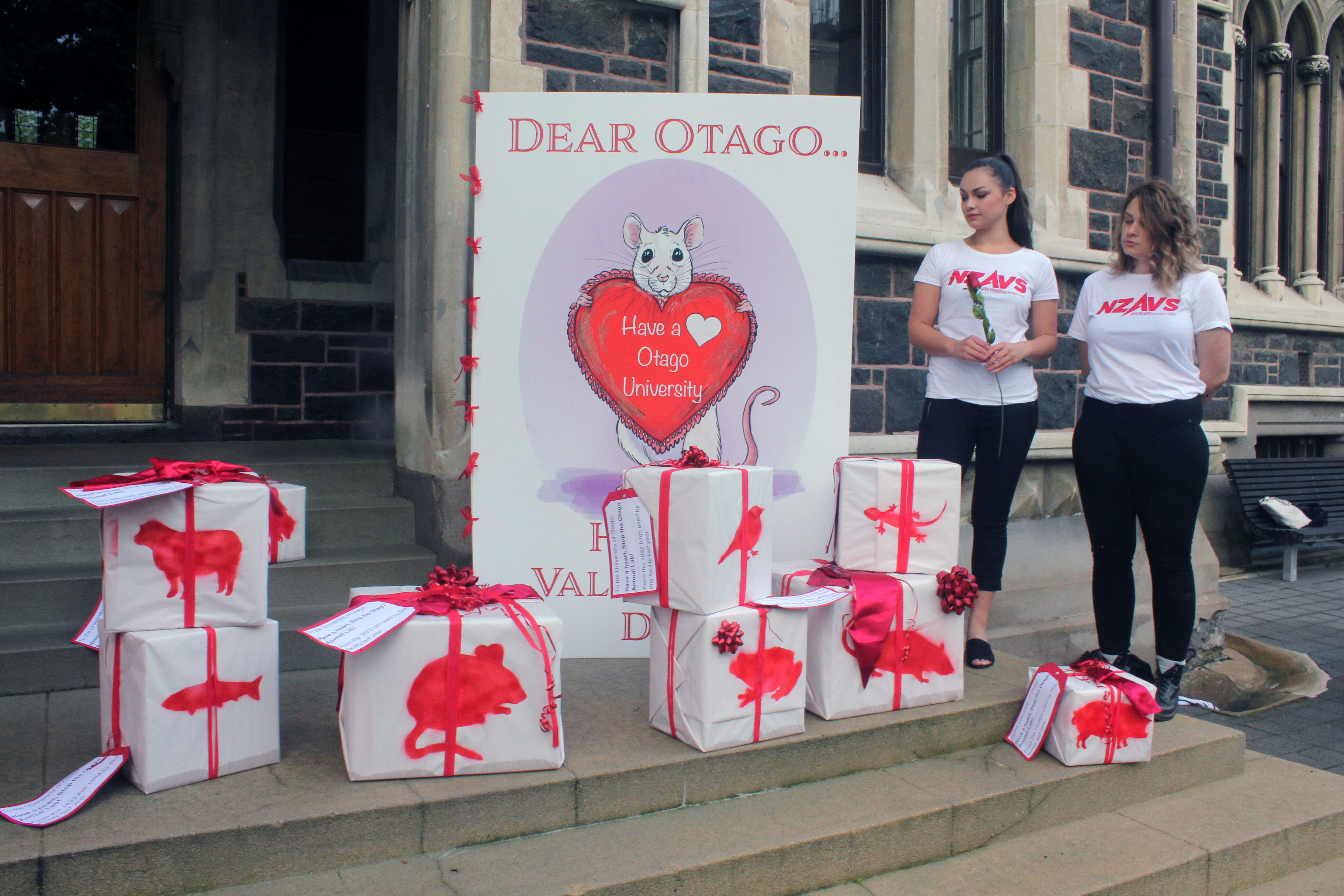 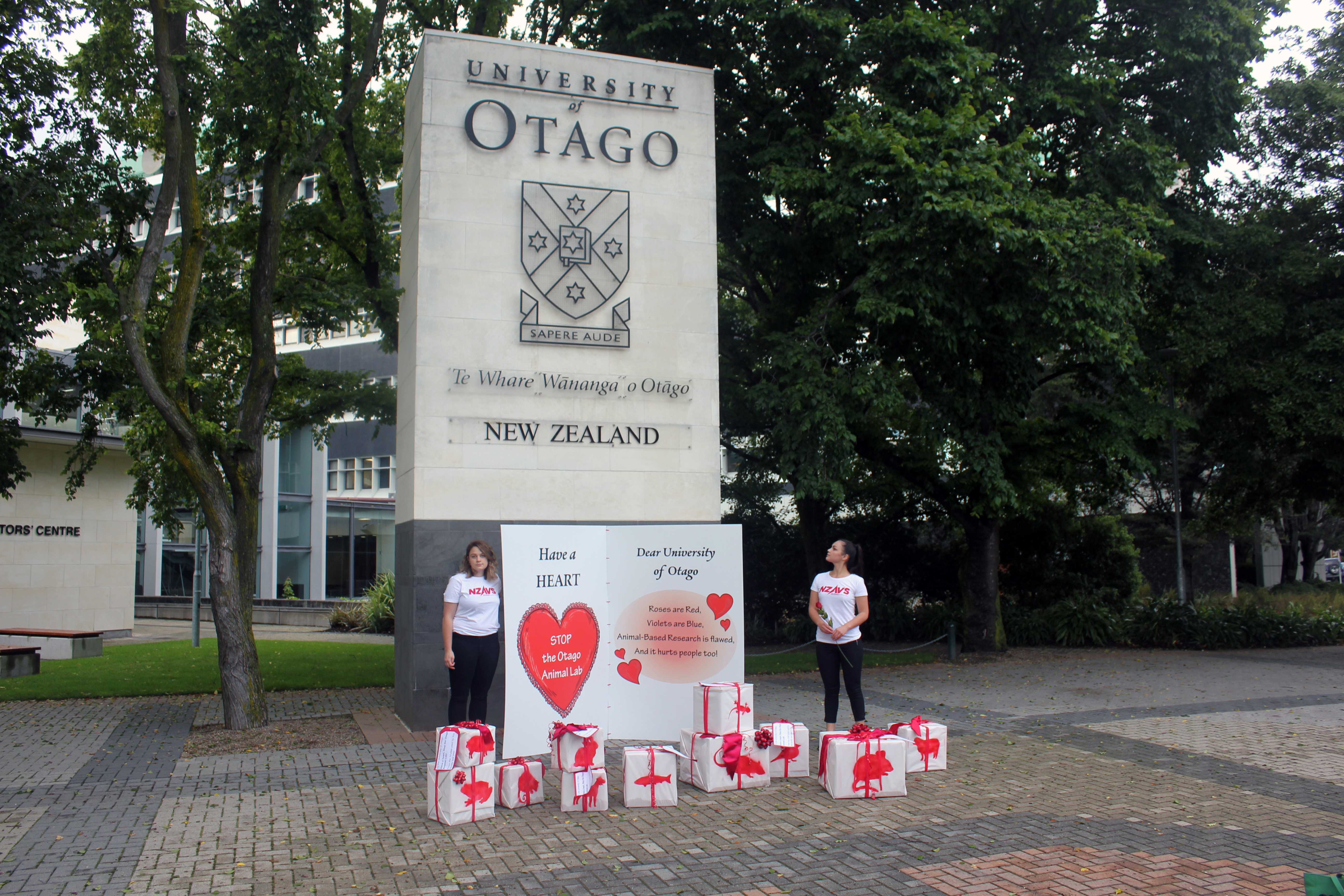