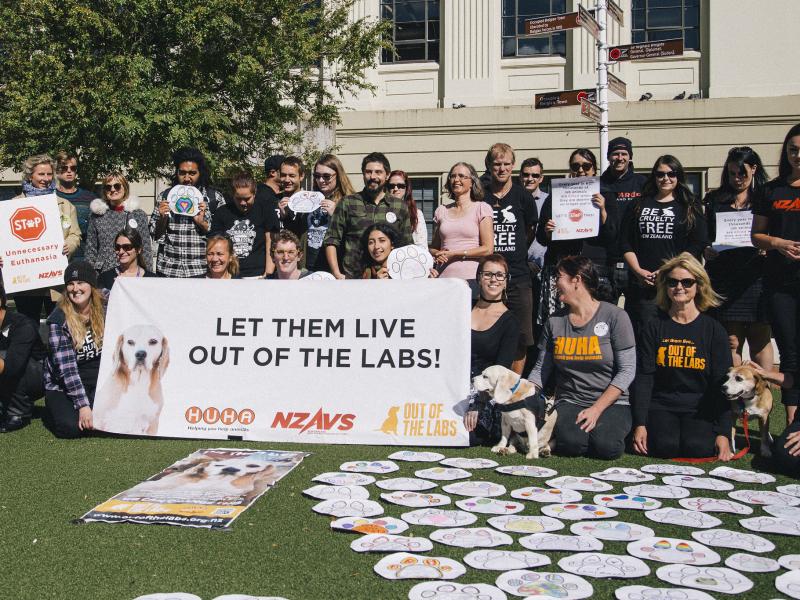 Let Animals Live ‘Out of the Labs' - Paw Prints for Parliament event!

We were in Wellington CBD today letting Parliament know that New Zealanders want animals ‘Out of the Labs’.

Today our Paw Prints for Parliament event went ahead in Wellington with great success! NZAVS and HUHA (Helping You Help Animals) organised this event to send a clear message to the government - That New Zealanders want animals ‘Out of the Labs’.

We created an installation in Civic Square made up of hundreds of messages from people all over New Zealand. These messages were written on paw prints, each one asking Parliament to acknowledge the organisations’ collaborative petition, 'Out of the Labs'.

These animals can be rehabilitated and rehomed through registered animal rescues such as HUHA. HUHA rescued and rehomed beagles from Valley Animal Research Centre (VARC) in 2011. NZAVS cared for two ex-lab rats who passed away recently. We want to give all animals in NZ the opportunity to have a life outside of the laboratory. 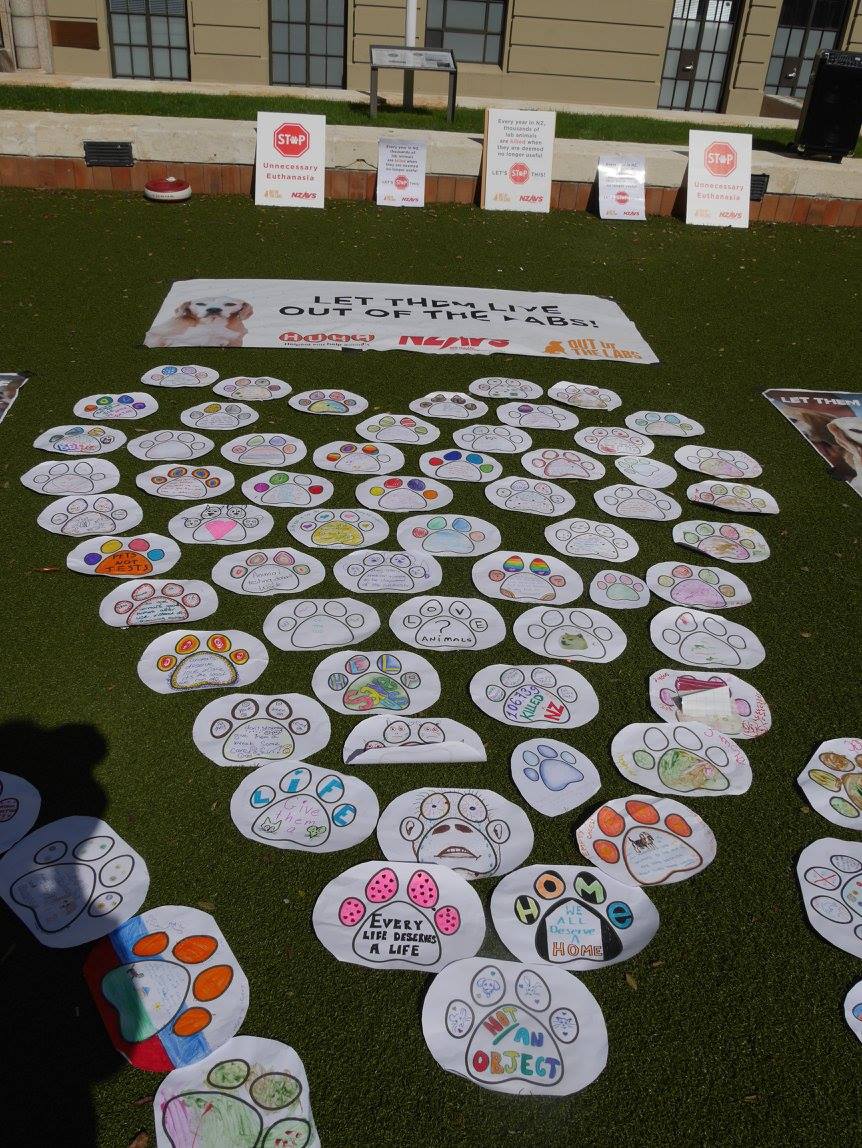 We and many other people around New Zealand have experienced situations where we have wanted to give ex-lab animals a new home and have then been denied. It is currently too easy for vivisectors to just use animals and then send them off to be disposed of — We want to change this!

NZAVS supporters and volunteers, HUHA supporters and volunteers, Green Party Members of Parliament - Mojo Mathers and Gareth Hughs, as well as members of the general public, came together to collectively show the Govt and the rest of New Zealand, that we all do not support animal experimentation and we will not sit by and allow victims of vivisection to be killed needlessly.

Thank you to everyone who attended the event today to give these animals a voice and to stand up against the fraudulent practice that is vivisection! 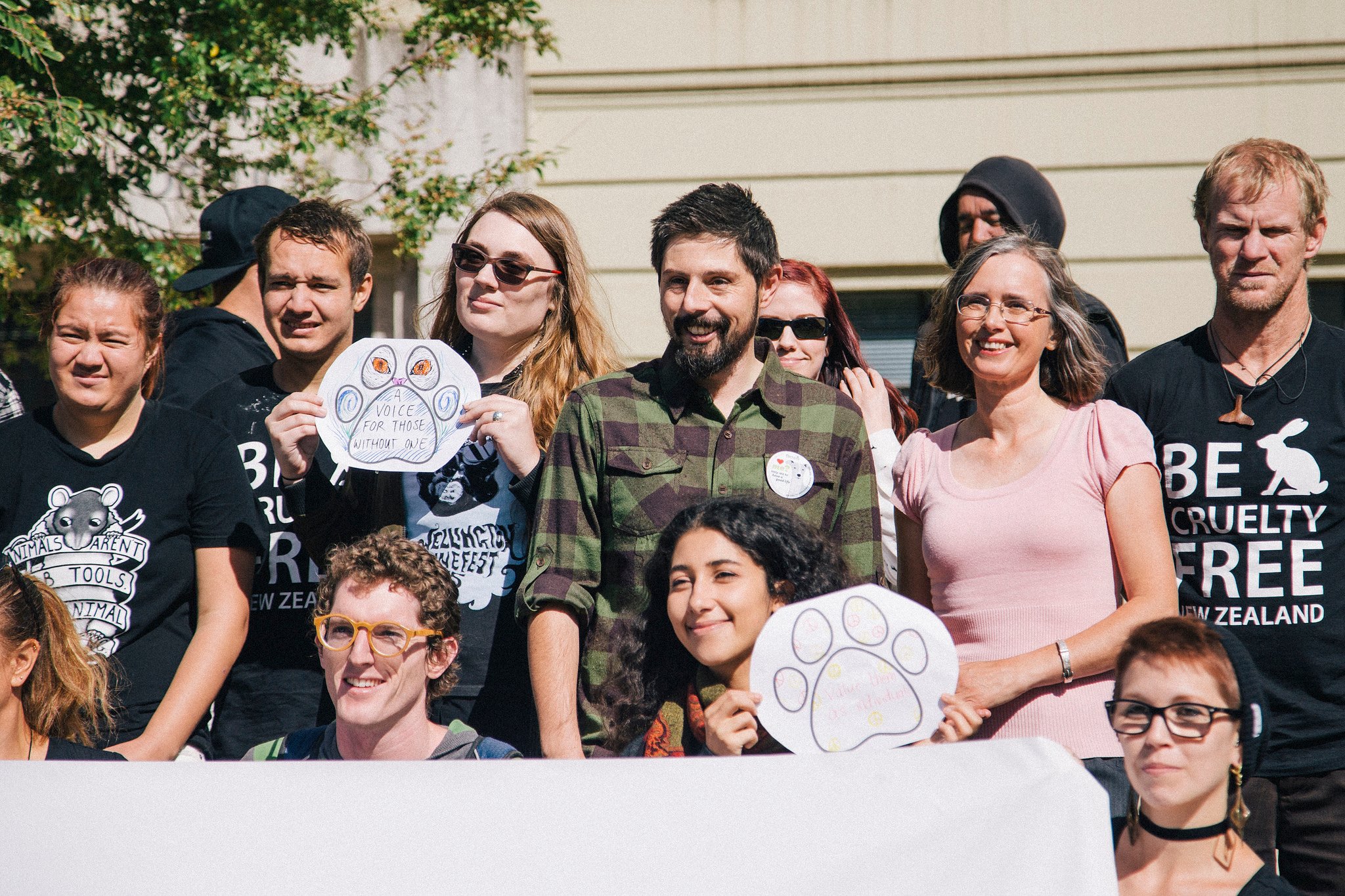 We already have over 10,000 signatures on our ‘Out of the Labs' petition! you can still sign it here. We will be handing this petition into parliament on the 27th of April, We would love to see you at the petition handover event!

When: Thursday 27th April, 11am-12pm
Where: Parliament Grounds/House, Molesworth Street (on the front lawn in front of the statue)

If you want to directly help NZAVS continue to fight for the freedom of lab animals and against animal testing, then donate now! We need all the help that we can get to abolish vivisection in NZ.

We are asking that the government enact a mandatory retirement policy for animals used in research, testing and teaching in NZ. - Ensuring these animals are offered up for public adoption through registered rescue organisations (like HUHA) instead of being euthanised; and that this policy also include all surplus and breeding animals.

We have included that last bit because some animals are bred for animal experimentation and never needed so they are killed. These animals are often 100% healthy and never get to experience life outside of the laboratory.

The response that we have had from this campaign shows us that New Zealanders really do care about the animals who are used for research, testing and teaching. NZAVS knows that we are a nation of animal lovers, we have just all been fed some misinformation regarding the necessity of animal testing.

• Some history has to be provided to aid in rehabilitation

• Animals used to breed from need to be included. They deserve the same hope

Policies like this are already in place in Australia and are being introduced in the United States of America and elsewhere. There is no reason why New Zealand cannot help lead the way and make this a reality here.