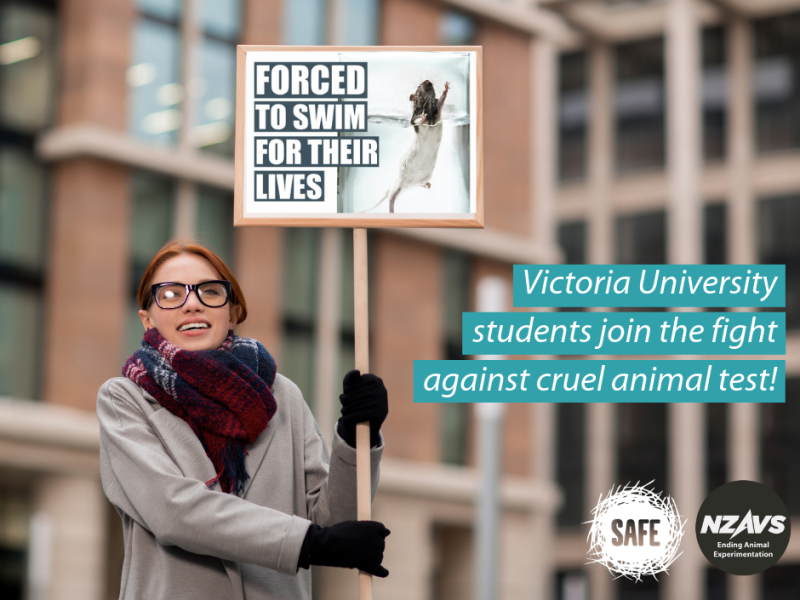 Hundreds of students at Victoria University of Wellington are demanding an end to the cruel Forced Swim Test!

Students from over a dozen clubs, including the Psychology Club, have signed a letter to the Vice-Chancellor and members of the University’s Animal Ethics Committee urging the institute to end the Forced Swim Test. The test is used as an attempt to mimic depression or hopelessness in humans, which the students say should be ended on ethical, scientific and financial grounds. The test involves placing a small animal such as a rat or mouse into an inescapable beaker of water, where they are forced to swim until they ‘give up’ and float.

Not only is the Forced Swim Test cruel, but it also does not model human depression. It is less predictive than chance at determining if a compound would be effective in humans. Victoria University is wasting valuable resources, including time and money, each time they approve this test.

The Victoria University Animal Ethics Committee has so far refused to commit to ending the use of the Forced Swim Test.

We must continue encouraging Victoria University to make this commitment and join the global shift away from this cruel and irrelevant test. Hopefully, committee members listen to these many concerned students and reconsider their decision!

TAKE ACTION: Send a message urging decision makers at Victoria University to reconsider and join the global shift away from the Forced Swim Test.

What students have said:

“I am a student at Victoria University and am appalled to hear that this is going on there. I would like Victoria to stop this cruel test now!” – Maya P

“I am a Victoria University student, and I am appalled that this test has passed through the ethics committee and been permitted to go ahead at our institution.” – Hayley

"Is this kind of lack of humanity and outright cruelty really what VUW wish to teach their students?  If the only way you can figure something can be tested is by causing harm, then the thing being tested is not worth it.  Find kindness and empathy within yourself, get creative and find another way or don’t do it at all, that would be my advice." – Kaylani

“I am 100% against the Forced Swim Test and believe this is an extremely cruel and completely unnecessary act.” – Sarah

“I expected my university to be way more ethical. The Forced Swim Test is archaic and needs to stop.” - Adrienne

If you’re a student at Victoria University and you want to have your say, please get in touch with us – nzavs@nzavs.org.nz

Send a message to members of the Victoria University Animal Ethics Committee, urging them to reconsider their decision and commit to ending the use of the Forced Swim Test.