DONATE NOW
The Ongoing Exploitation of the Auckland Island Pigs 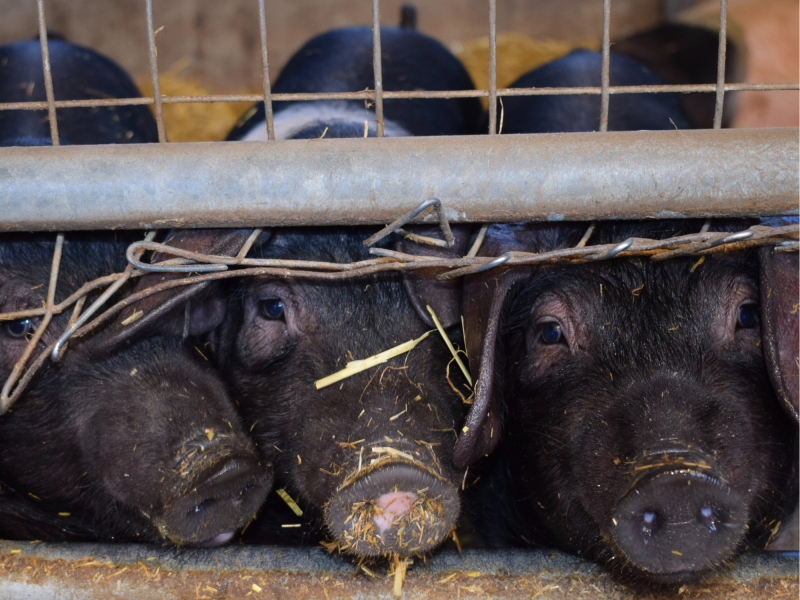 The Ongoing Exploitation of the Auckland Island Pigs

A group of pigs were originally taken from Auckland Island in 1999 by the Rare Breeds Conservation Society.

The pigs became desirable research subjects as they hadn’t been exposed to the pathogens and diseases that other pigs, in non-isolated areas, had. This meant a breeding facility was established so that more ‘test subjects’ could be created.

These pigs, famously known as “the Auckland Island Pigs,” have been used, harmed and exploited in many ways:

Captured from Auckland Island using dogs: According to the Southern Heirloom Breeds Trust “the only really successful method of capture was to use the dogs to find and hold animals until members of the party arrived to tie their feet and jaws securely.”

Kept in unnatural conditions: Some pigs have been kept in a sterile, isolated environment so that they can remain pathogen-free. Instead of grass on their trotter and mud to roll in, these pigs get a concrete pad and concrete walls.

Bred from: Breeding programmes for animals used in science often involve impregnating the same female repeatedly, her reproductive organs and her emotions continuously being exploited.

Killed so that their cells and their organs can be harvested and used:  Cells from the pigs have been used for research into Parkinson’s Disease, diabetes, and auditory nerve cell therapy. Their organs have also been used in research relating to pig organ transplantations to humans.

The Auckland Pigs have been (or are being) used in research where:

The Institutes doing the research

Cochlear implants can bring back partial hearing for profoundly deaf patients. However, this isn’t a long term fix and the theory researchers in Australia had, was that the NZ pigs’ brain cells could help with this.

To obtain the brain cells that were implanted into the ears of kittens, newborn piglets (7-10 days old), both male and female were anaesthetized and euthanized by having their blood drained (exsanguination). Specific brain cells were then removed and encapsulated so that they weren't rejected by the immune system of the kittens when they were implanted.

Although the cruel experiment involving kittens took place in Australia, the first part of this procedure (where pig brain cells were "harvested") was done by Living Cell Technologies, a New Zealand based company.

2. Pig cells implanted into the brains of Monkeys in China

A group of 15 male Rhesus monkeys were subject to a procedure that intentionally causes brain injury — a lesion was made in their brain to try and replicate symptoms of Parkinson's Disease.

Monkeys were then subject to intrusive brain surgery; they were anaesthetized and their heads were fixed in a primate stereotaxic frame, holes were drilled into their skull and capsules containing cells from Auckland Island piglets were implanted into their brains. Then 24 weeks after the implantation, the monkeys were killed. Read more here.

To obtain the cells that were implanted into the brains of monkeys, the cells were surgically removed and "harvested" from newborn piglets (5-15 days old).

Although the cruel experiment involving monkeys took place in China, the first part of this procedure (where pig brain cells were "harvested") was done by Living Cell Technologies, a New Zealand based company and was approved by an NZ Animal Ethics Committee.

3. Pig cells implanted into the brains of Rats in NZ

Rats were anaesthetized and placed in a stereotaxic frame where their heads were cut open, their skulls drilled into and capsules containing pig cells were implanted using a catheter.

After 4 and 6 months the rats were killed, their brains were drained of blood and dissected.

To obtain the cells that were implanted into the brains of the rats, newborn piglets (6-12 days old) were anaesthetized and euthanized by having their blood drained (exsanguination).

The research that we have discovered involving the Auckland Island Pigs can be defined as Xenotransplantation which refers to the transplantation of living cells, tissues, or organs from individuals of species into another species.

The ethical problems involved for non-human animals are obvious – their bodies are exploited in multiple ways and many are killed. Animals are not factories that we can use to produce desirable cells from, and they are not made up of spare parts that we can just take and use as we please.

One of our core beliefs is that animals aren’t commodities; they are sentient and capable of a wide range of emotions including pain, fear and happiness. It is therefore morally wrong to exploit animals.

Xenotransplantation creates the risk of rejection of the animal tissue or organ by the person's immune system.

Using animals as “spare parts” and as “factories” is not only unethical but is also outdated. There are viable and ethical replacements available that can be used instead and where there are gaps, we see opportunities to develop such methods.

Science and ethics can go hand in hand and even benefit one another.

For example, according to Dr Ray Greek, an international expert on the use of animal models, although it is possible to harvest insulin from animals (e.g. pigs), today we have much better synthetically produced insulin with invitro technology. Animals do not need to be harmed and we are left with a superior result.

It also makes no sense to pursue xenotransplantation in an age of human stem cell technology8 and the production of human “mini-organs” (organoids)9 as well as 3D bio-printing.10 By using the patients’ own stem cells, there is no risk of organ rejection or the transmission of viruses. Not only are these technologies relevant to human medical research, but they also provide a much safer supply of human organs.

The harmful use of animals in science needs to end and the New Zealand Government can make important and overdue steps towards this inevitable change including an upgrade to outdated policies that encourage the ongoing use of animal experimentation and redirecting funding towards evidence-based research.

Since approximately 2000, NZ has invested $70 million into xenotransplantation research – this includes money from the NZ Government.11 This funding should be redirected into ethical, human-based research. Additionally, this type of research should be prioritised over animal-based research.

We are currently developing a ground-breaking campaign which will target policy and funding available for research in NZ and other key changes that need to be made. This way we can strike directly at the source and stop the harmful use of animals in science from being funded in the first place!

Donate to help get our campaign up and running!

We want to acknowledge and thank our Scientific Advisor, Andre Menache for helping write this article.