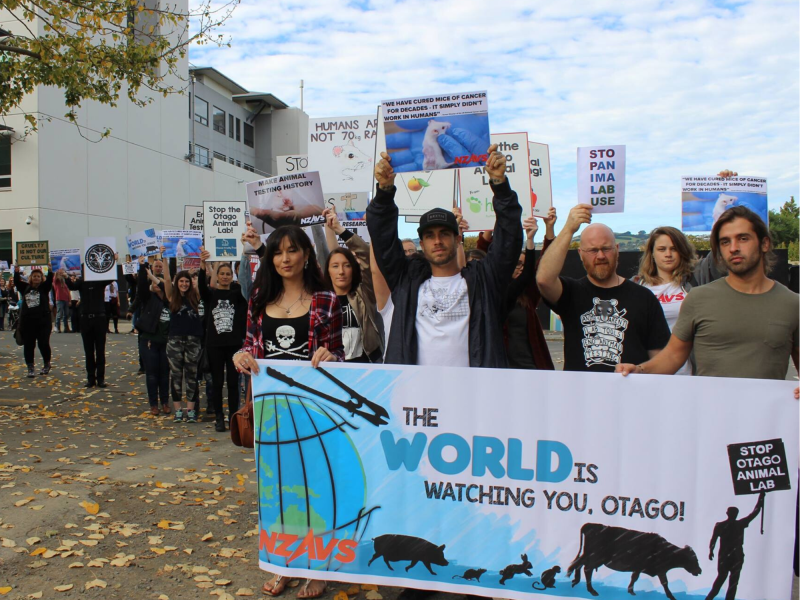 Moving forward with the Stop The Otago Animal Lab campaign.

In 2016, the University of Otago announced they would be developing a $50 million animal lab.

NZAVS spearheaded a massive response to this decision, calling on the university to drop the lab. Despite this, the University of Otago has made no concessions of any kind and have chosen to keep this focus on investing in outdated research methods.

In response, NZAVS’ campaign plans are growing to influence the industry on a wider scale. Exposing the cruelty of Otago’s animal research is a critical component of this plan. By exposing to the public what happens at the University of Otago, we can work with other key decision-makers to address animals used in research, testing, and teaching.

The flagship of this new initiative is our Striking at the Source campaign, which will target the fundamental drivers of animal use in science. The details of the campaign are still a secret, but here is a preview of what is to come.

Universities like Otago rely on funding external to the University to conduct their research. This funding comes from a variety of sources, but many of them are governed by rules about public funding. Animal research is also overseen by animal welfare laws – and those laws include critical issues like transparency for the industry.

Over the coming months more will be revealed about the upgrades to NZAVS’s campaigns.

Read more about the past achievements of the Stop the Otago Animal Labs campaign here.