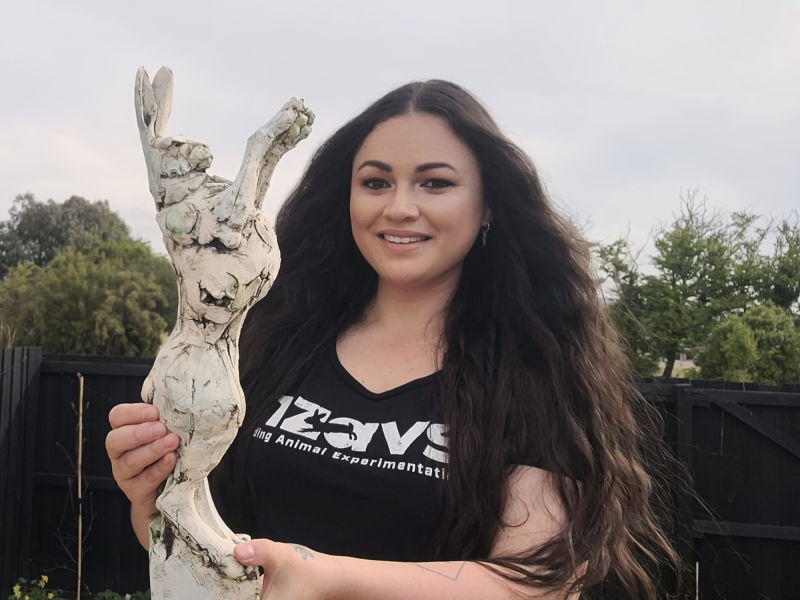 For the 2022 Prize, there were 65 shortlisted organisations and individuals from 26 countries and today, NZAVS was announced as the winner of their Lobbying Prize category at the online LUSH Awards ceremony!

The award we were given includes a LUSH trophy (featured in the photo above) and £50,000 (over $90,000 NZD) in prize money. This will give a huge boost to our future campaigns against animal experimentation.

The Lobbying Prize aims to reward the work of exceptional individuals, groups or organisations pushing for change, focusing on policy interventions promoting the use of alternatives. NZAVS won for our campaign against the use of the cruel and invalid Forced Swim Test in NZ.

Watch the short video about this award, made by LUSH below:

The campaign that led to NZAVS winning this prize:

NZAVS has been working to end the use of a cruel and scientifically invalid animal test called the Forced Swim Test for several years. Over this time our work has been heavily focused on educating the public and lobbying the NZ Government for change. Tactics used included public actions such as protests and stunts and we submitted a petition over 20K signatures strong to the NZ Government asking for a ban on the use of this test (in collaboration with animal advocacy group SAFE). This work had many benefits and mobilised a lot of Kiwis, however it did not result in a ban like we had hoped.

Instead of giving up, we shifted gears and started embracing a collaborative approach where we started focusing on educating and working with the institutes using animals for science in NZ. Our Executive Director spoke at the 2021 Australian & New Zealand Council for the Care of Animals in Research and Teaching (ANZCCART) conference – a profound first for NZAVS. In the past we had protested these conferences so, going inside to attend and present was a new and exciting opportunity.

Our Executive Directors presentation was about the invalidity of the Forced Swim Test and why the scientific community needs to leave this test in the past. Since this conference we’ve continued this collaborative approach and have spent more time working behind the scenes to encourage change from within the industry.

We’ll continue to regularly monitor if the Forced Swim Test is being used in NZ, but it does appear as though we have removed its social license. I.e., due to our public awareness and collaborative work, we’ve been able to put institutes off from wanting to use the Forced Swim Test, even though there is not legislative ban in place prohibiting it’s use.

We want to thank our thousands of supporters for giving our voice for animals strength, LUSH for this incredible award, SAFE for supporting our campaign and Dr Emily Trunnell from PETA for her significant contribution to our campaign against the use of the Forced Swim Test.