DONATE NOW
Symbolic Funeral Held at the University of Auckland 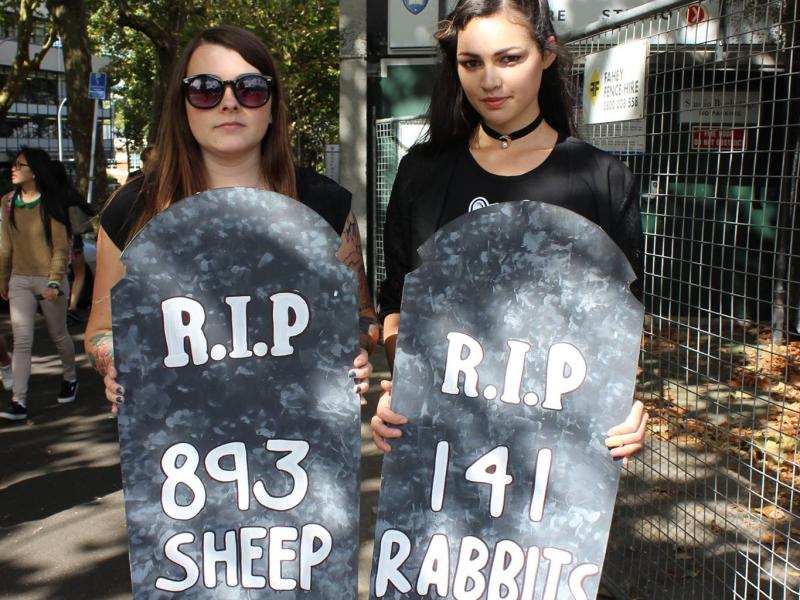 Symbolic Funeral Held at the University of Auckland

On the 4th April 2016, a group of NZAVS volunteers gathered together at the University of Auckland to show respect for the 12,456 animals who lost their lives unnecessarily at the campus.

Auckland university used a total of 21, 953 animals in the year of 2014 for research, testing and teaching. Over half of these animals (57%) were killed after or during the experiments.

Volunteers held symbolic gravestones that represented each different species that was used by the university. From mice to sheep and birds, all lives lost were mourned. Our volunteers stood with a united message for the animals already dead, as well as the ones still trapped in the laboratories of Auckland University - we see you, we're trying and we're sorry.

This vigil was planned to be a part of the Auckland University Ecofest which was unfortunately cancelled. This, however, didn't stop us, just as nothing ever will. Even after being asked to leave the campus, we moved to the footpath (public property) to finish our vigil. We have the most amazing, dedicated and passionate volunteers. With them, by our side, we will continue to fight against animal testing until it is completely abolished!   Note: 2014 is the most recent available year that we have access to data for. We gathered to remember these animals and to educate students on the extent to which animal testing still occurs on their campus. We were also there to spread awareness on the many issues with vivisection. During the two hour vigil, a series of anti-vivisection facts were read out over the megaphone such as:

"Open your hearts, open your eyes and see the true victims of animal testing. Not only are the victims the ones that we are remembering today but we as humans are victims, animal testing hurts us too!"   "A huge problem with finding out what happens to the animals used for experiments in New Zealand is the lack of transparency... government funded facilities like Auckland University do not have to give us details on what each experiment is for and what each animal has to endure."