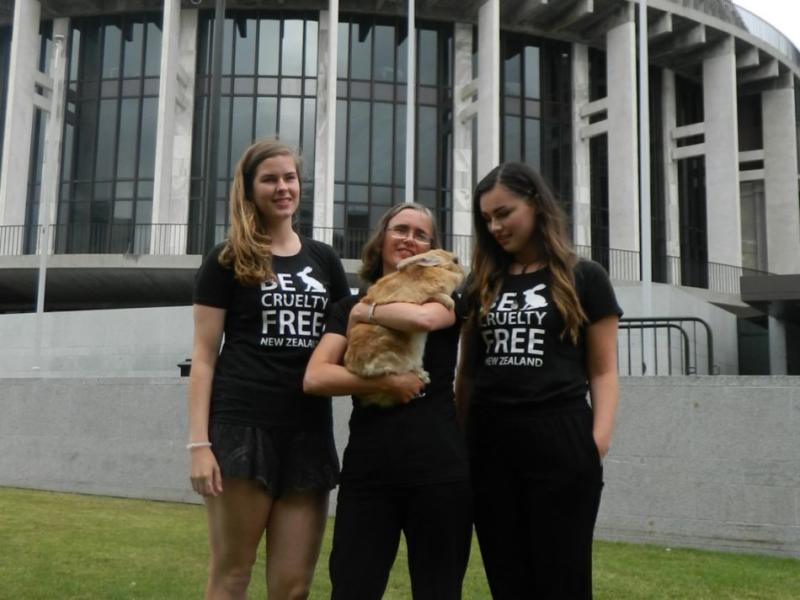 Mojo Mathers introduced an SOP to ban cosmetics animal testing in the Animal Welfare Act last March, however, the select committee did not include the ban in its recommendations to Parliament despite overwhelming public support and backing from New Zealand's cosmetics industry.

#BeCrueltyFree and Mathers believe the new SOP provides a workable solution that addresses government feedback and delivers a ban on cosmetics cruelty that Kiwis want. SOP044 is likely to be voted on very soon - it could be in early March 2015. It needs the National Party to support it to pass so please let them know you want them to do so. There are several ways to do this:

To celebrate the new SOP being published NZAVS Campaign Manager Tara Jackson, Green Party MP Mojo Mathers, #BeCrueltyFree campaign supporter Greta-Mae McDowell and #BeCrueltyFree campaign ambassador Crumpet the Rabbit met outside Parliament to let New Zealand know. From left to right: Greta-Mae McDowell, Mojo Mathers (back), Crumpet (front), Tara Jackson.   The media took notice and the launch of the new SOP gained significant coverage on TV, radio and in print with other outlets also covering the news. This gave a new boost to the campaign that led to tens of thousands of people sending emails to politicians in a matter of days!   Together we can let the Government know they need to do the right thing and ensure no animal will ever be used for cosmetics testing in New Zealand. And then when that's done we can end the import and sale of animal tested cosmetics...